Raquel Rivera (she/her) is a first-year student at Harvard College from San Diego, CA. Her experiences living on the border and her passion for social justice have led her to pursue a concentration in Government with a secondary in Latina/o Studies and a citation in Spanish. On campus, she works as a Diversity Peer Educator. She is also a Citizenship Tutor at the Institute of Politics, as well as a member of Latinas Unidas, RAZA, and Act On A Dream.

At the end of the first day of class, I asked someone in the room if the course would be available the next semester or in the coming years. I wanted to take the class but wasn’t sure if it would fit in my schedule. A student responded that the professor was up for tenure, so I should take the course now, just in case. I knew that if she were gone, the course would probably not be taught, so I decided that I needed to take Professor Lorgia García Peña’s Spanish 126 class, Performing Latinidad, that fall.

I was extremely excited to study Latinidad and to consider it critically. My desire to think critically about Latinx cultures and representations, both by Latinx and non-Latinx people, was suddenly the purpose of an entire class. I was ecstatic!

Professor García Peña’s class made me feel seen as a Latina for the first time in an academic setting. Performing Latinidad made me feel seen by covering topics and readings that are rarely addressed in a typical history or literature class. To learn about Chicanx history, we read the work of renowned poet and theorist Gloria Anzaldúa. We then learned from Chicana poet and playwright Cherríe Moraga how to write informed by the theory of the flesh. As I read Anzaldúa’s Borderlands/la Frontera: The New Mestiza, I remembered my seven-year-old self at the beach located just five minutes away from my house, seeing the border wall that separated me from Tijuana, Mexico, extending all the way into the Pacific Ocean. When Anzaldúa described seeing “el mar atacar / la cerca en Border Field Park / con sus buchones de agua,” I was transported back to my home--back, as she put it, to “this thin edge of barbwire,” (Anzaldúa, 24 and 35). Reading Anzaldúa’s work both broke and mended my heart. Though our experiences as Chicanas were very different, her story gave me strength. I felt, somehow, that I knew her and that she knew me.

Performing Latinidad helped me make sense of the culture shock I felt as I settled in at Harvard. The culture shock I was experiencing was not shock related to my workload, but rather shock caused by some of the different social norms and expectations I was encountering. For instance, back home, no one would use the term “ICE” to mean “in case of emergency”. When a residential administrator at Harvard used the phrase to share the university police’s phone number with a group of first year students, I felt a rush of fear, despite my privilege as a U.S. citizen. I felt the impact once again of growing up along the border: heavily militarized, at times painful or unforgiving, but still home. Growing up on the border does in fact mean, like Anzaldúa wrote, that we are living in “an open wound,” finding our “home [in a] thin edge of barbwire,” (Anzaldúa, 35).

I am forever grateful that Professor García Peña enabled the students in her class to represent the real and symbolic borders that cut across us through art projects that we installed in Harvard Yard. Being able to embody our histories and our untold stories was a way of bringing our Latinidad to the forefront of this university at a time when ethnic studies is not deemed worthy of departmental status. Professor García Peña centered her students’ experiences, broadening in this way the academic conception of Latinidad.

In her class, Professor García Peña made sure to highlight the rich histories of marginalized Latinx identities, like Afro-Latinx communities and LGBTQ Latinx identities, through readings like Down These Mean Streets (Piri Thomas) and Sum of Parts (Ana-Maurine Lara) and films like Mami, Yo y Mi Gallito (Arisleyda Dilone). She taught about blackness and Latinidad and how they were not mutually exclusive. She taught us the history of Afro-Latinx people throughout Latin America and the diaspora. Professor García Peña taught us the concept of a “triple-consciousness,” as theorized by Juan Flores and Miriam Jiménez-Román, building on the historic contributions of thinkers like W.E.B. DuBois to ethnic studies and black studies.

Professor García Peña also crafted her curriculum so as to include peoples of Central America and the Dominican Republic, communities often overlooked in the academy when discussing U.S. Latinx communities. She introduced us to talented Central American authors like Héctor Tobar, and Dominican writers and artists like Josefina Báez. Because of Professor García Peña and Performing Latinidad, my classmates and I actually got to work with Josefina Baéz, founder and director of Ay Ombe Theatre and groundbreaking dancer and performer. In the class we also were able to meet Professor Nicole Guidotti-Hernández and learn from her more about the commercialization of Latinidad. Additionally, we had the opportunity to speak with filmmaker and director Arisleyda Dilone after viewing portions of her documentaries, and explored gender constructs across borders and generations.

Professor García Peña, however, went beyond building an inclusive and academically challenging syllabus. Just as importantly, she was a steadfast mentor to well over 20 graduate students and served as an unofficial mentor to countless undergraduate students as well.

Within days of arriving at Harvard, I entered a classroom led by a professor who was not only willing, but capable of navigating nuanced and complex understandings of race, gender, sexuality, class, citizenship, and representation. I only wish I had realized sooner how rare that would be. I am truly grateful for that advice I received on my first day of class. Taking Professor García Peña’s class has been my best academic decision to date. The texts I read and the theories I learned in her class have grounded me and continue to inform the way in which I understand not only Latinidad, but ironically, her tenure denial. Without a doubt, Professor García Peña’s class will impact my understanding of the world for years to come. 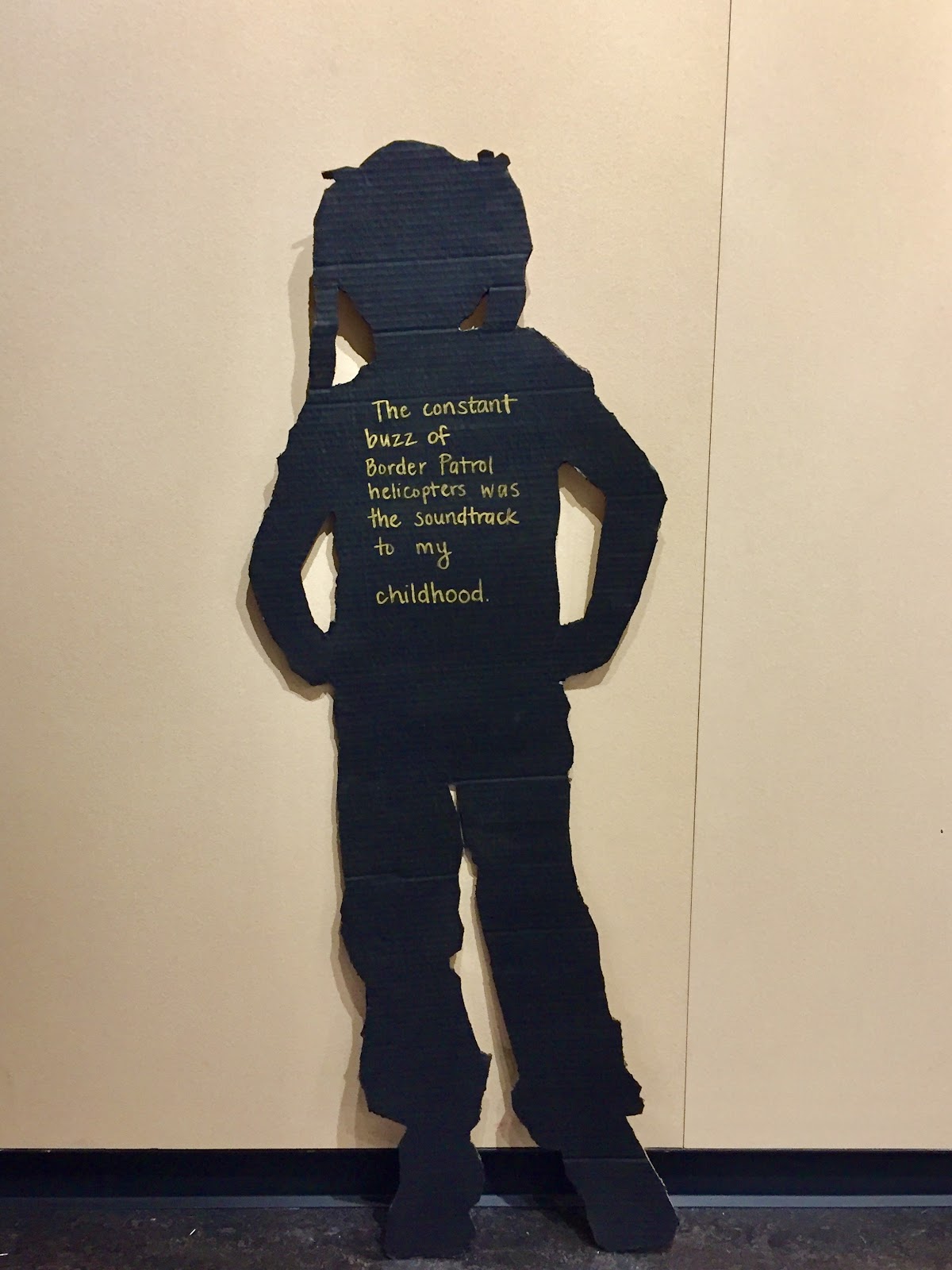 A cardboard shadow of Raquel Rivera’s silhouette from a childhood photo when she was 7 years old, in front of the U.S./Mexico border wall. This shadow was part of the Fall 2019 Performing Latinidad art installation in Harvard Yard. 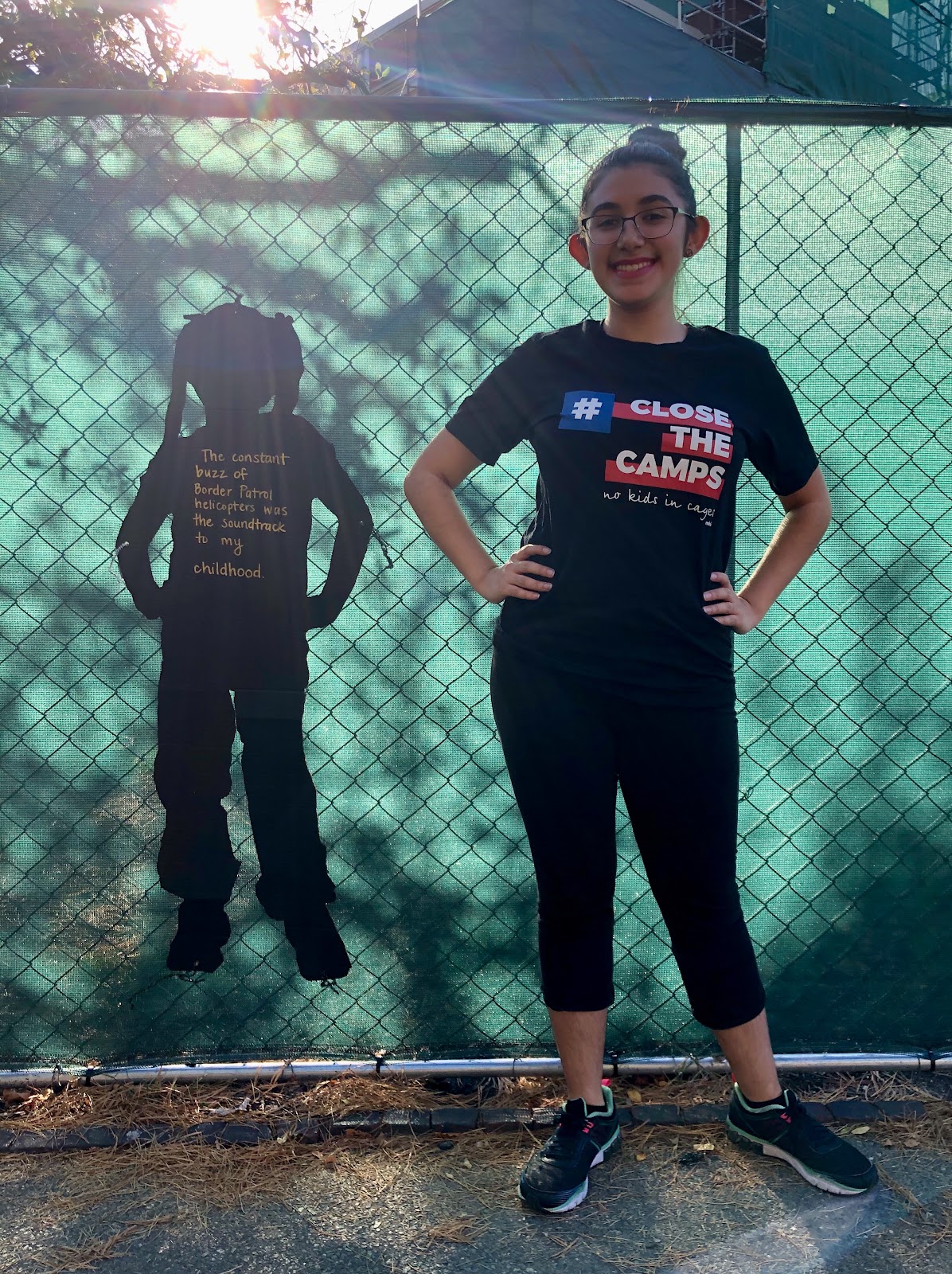 Raquel Rivera stands next to my cardboard shadow, which is tied onto a fence in Harvard Yard. Her shadow’s torso reads, “The constant buzz of border patrol helicopters overhead was the soundtrack to my childhood.” Her shirt says “#CloseTheCamps” and “no kids in cages.”